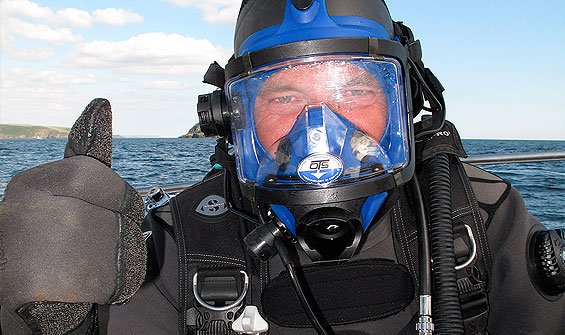 In the North Atlantic Ocean there’s an island boasting an abundance of stunning marine life and thousands of incredible shipwrecks. With giant sharks, glowing animals and arches as dramatic as any cathedral. Where is this island? You live on it!

There’s no denying it, most people really don’t know how fabulous our waters are; With my co-presenters Frank Pope and Tooni Mahto I spent most of last year on the ultimate British waters diving expedition and I’m delighted to report that I still have the same enthusiasm for our waters as I did when I made my first sea dive off Chesil Beach in1969.

Back then I was wearing a home made wet suit from a kit (black with yellow stripes of course) and was trying to keep up with old hands carrying the boat, engine and gear across those round beach stones. It would have been a fantasy to me that one day I would be wearing the best equipment, been on the best dive sites and had the finest support to make a BBC diving series about British waters.

And yet – that’s exactly what happened; I dived with the Royal Navy Clearance Divers to find and explode 1,000lb bombs, dived with countless basking sharks, fluorescing beasties, jellyfish, conger eels, seals, caught and ate lovely scallops, made the best wreck dives of my life and even performed a complete autopsy on a dolphin.

I interviewed fishermen and scientists to shed light on current ocean conservation issues and spent a few days being pooped on by sea birds to reveal important changes in marine life in our waters. And that’s not the half of it!

Britain’s Secret Seas is four, one-hour episodes and without a doubt is the most satisfying television project that I have worked on. It took me a year of ideas generation, research, writing, meetings and corridor crusades to get the series commissioned. Without a doubt I could not have done it without the support, encouragement and hard work of the UK diving and marine science community. You made it happen. Thank you!