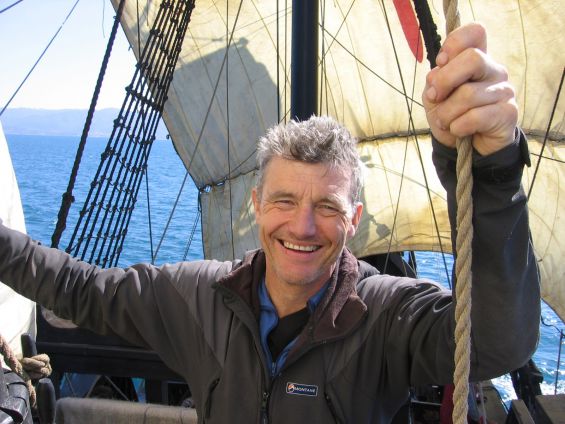 These are the dramatic tales of men who set sail into the unknown and made scientific discoveries that changed our world forever. Each programme tells a gripping true story of adventure, misfortune and breakthrough with the aid of documentary-style reconstruction. At the same time, Paul recreates each explorative journey to reveal the far-reaching impact and knock-on inventions without which today’s world would be unrecognisable.

Voyages of Discovery is being broadcast in the UK and worldwide and can be found via BBC Knowledge, Public Broadcasting Service and most country TV listings. The series can also be downloaded. 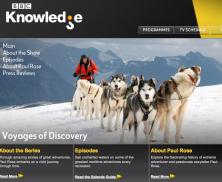 Thank you for agreeing to a Q&A we'd like to feature in our July cover story on Voyages of Discovery.  First of all, I've enjoyed boning up on your subject and watching clips on the various websites, your own included, of course.  (And I liked that feature on you from earlier this year in my favorite British daily, The Guardian!) 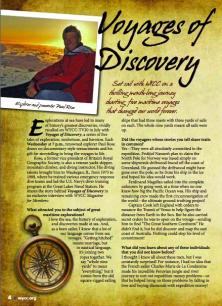 1. What attracted you to this subject—history’s greatest maritime explorations?

I had an idea about discoveries made at sea. I love the sea and the history of exploration.

And as I am also a keen sailor I knew that a lot of our language is based from sea voyages, 'getting hitched' now means marriage but in nautical language it’s joining two ropes together. The 'whole nine yards' we use as saying ‘everything’ but it’s from the old square-rigged sailing ships that had three masts with three yards of sails on each.  The whole nine yards meant all sails were up.

Then there are the technological advances, like the brilliant Harrison’s Clock which helped solve the measuring of Longitude problem, all affect our modern lives.

So when I worked this up with BBC it turned into Voyages of Discovery, which was a really cool thing as it meant we could focus on the people and their journey and of course also cover the discoveries made.

It was then a massive job to try and narrow it down to five! Wow, it took ages. You can imagine those meetings! All credit to the great BBC and research team for making it possible for me.

2. Did the voyagers whose stories you tell share traits in common?

Yes, they were all absolutely committed to the expedition.

Just think of that unbelievable commitment of Nansen to claim the North Pole for Norway. He based it on some shipwreck driftwood that had been found off the coast of Greenland and he guessed that it might have gone over the pole. So he froze his ship, the Fram, in the ice and hoped it would work.

Or La Condamine leaving the comfortable and familiar science environment in Paris to make an incredible journey to South America to measure something as challenging as the shape of our planet.

Or Magellan who’s plan was to sail the complete unknown and sail to the Spice Islands by going west. Nobody even know how big the Pacific was. His ship and remaining crew made the first circumnavigation of the world. The ultimate ground- truthing project!

Captain Cook left England with orders to measure the Transit of Venus to help us figure the distance from Earth to the Sun. But he carried secret orders that he had to open on the voyage and they ordered him to find The Great Southern Continent. It was only a theory that there must be a heavy land mass at the south pole to 'balance' the weight of all the land in the north. He didn’t find it, so he went on to discover and map the east coast of Australia. Nothing could stop his level of commitment!

And of course can you imagine the commitment it took for Swede Momsem and his dive team to try the untested submarine rescue bell to help those men on the Squalus sub? He led the first ever successful sub rescue and his divers are true heroes. I met the last surviving crew member of the Squalus, Carl, and also the last surviving member of the topside rescue team, Earl. And you know they both have that great spark of commitment still!

3. What about any of these individuals did you learn by telling their stories—something that you did not know before?

Yes – I knew all of the main expedition accomplishments and the journeys. But about the men themselves I learned a lot more than I thought I would. I started the project feeling that I knew all about these men. Then as it developed I was constantly surprised! For instance;

I had no idea that La Condamine did that incredible jungle and river journey to sort out the expedition money problems. Or that he helped bring those problems on by falling in love and buying diamonds with expedition money!

I was amazed when I learned how hopeless Nansen was with women! He remains my ultimate polar hero.

Cook turned out to be a more inspirational leader than I had thought. He was considered fair and considerate which was not usual at all in those days.

Swede Momsem was a technical genius and it was a surprise to see how much he experimented with diving mixed gases. We still use some of his thinking today.

Magellan’s massive commitment to the church was his undoing in the end. I had no idea that the battle in the Philippines was due to his passion to convert the islanders and that Magellans’ men were not all behind him at that point. He had brought them through unbelievable dangers and they respected him totally, but he lost them when he insisted on that final battle.

4. If you could sit down with any of them—Cook, Magellan, Fridjtof Nansen, the French expeditioners, Momsen—what questions would you ask of them?

Cook;
1.How did you handle your worry about the transit of Venus measurements?

2. I dived the reef in Australia that you ran aground on. Can you tell me about the frantic response and then those days of emergency repair?

Magellan;
1. What did it feel like to overcome the mutiny?

2. The crossing of the Pacific equals the first flight to the Moon these days – how did you resist the urge to turn back?

Nansen;
1. When you left the Fram frozen in the ice so you could attempt the North Pole journey with the dogs you knew that you would never make it back to the ship, due to the ice drifting and the uncertainty of positioning. Were you massively excited or overwhelmed by the commitment level?

2. What was the secret to keeping up the high standard of scientific measurements during the winter on Fram – did the crew just go for it because they believed in the expedition so much or did you have to convince them?

La Condamine;
1. When Seniegues was attacked at the bullfight what held you and the team back from stepping up to help him?
2. When I sit high in the mountains the last thing on my mind is a new system of measurement! What triggered your thinking to invent the basics of the metric system at that time?

Momsem;
1. When that cable broke and the rescue bell was literally hanging by a thread it was highly unlikely that your hand pulling method succeed. You had those men’s lives in your hands, were you exhilarated or terrified?
2. How did you actually work out the mixed gases for the divers?

5. What are some of the ways that their voyages—most of them so long ago—influenced the modern world?

Great one! There are so many, but here’s a few;

The Earth is round! And we know how big the Pacific is and how to get there – Magellan.

If you have vitamin C and fresh food you don’t die from scurvy. And we know how far it is from the Earth to the Sun – Cook.

We know how to not get malaria. We know the shape of our earth (fat in the middle).We use condoms, tires, windshield wipers. And it’s not a good idea to spend a great chunk of expedition money on girls! – La Condamine.

There is no land mass in the far north, the far north is a frozen sea. Cross country skis as we know them today. Water sampling equipment still called “Nansen Bottles” and sledges we all use in the Antarctic still unchanged and still called "Nansen Sledges” – Nansen.

Mixed gas diving which we use routinely in commercial and recreation diving. Submariners are no longer called the “Coffin Service” – Momsem. 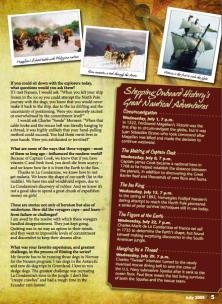 6. How did these explorers make do without the technology and sophisticated equipment available today...or, on the contrary, did they have some advantages over today's explorers?

This is one of the brilliant things – they were all using what was the finest technology of the time. And yes – I think they did have some advantages, for instance – life not on an expedition could be pretty hard in those days, so expectations were different.

7. These are stories not only of heroism but also of misfortune.  Could you point to an example of how the voyagers coped, and learned, from failure or challenges?

I am awed by the resolve these voyagers handled disappointment. They just kept going. There was no way that quitting was an option in their minds and they went to impossible levels of commitment and discomfort to keep their dream alive.

Imagine arriving at the eastern side of the Pacific after a hellish winter on the South American coast which included a mutiny, then searching and finding the way through what is now called the Straits of Magellan, and then expecting the Pacific to be about a week of sailing, only to find out by doing it that it was a 100 days!

8. What was your favorite experience in the process of filming the series, and what was your greatest challenge?

My favorite has to be running those dogs in Norway for the Nansen programme. I ran dogs in the Antarctic and now do dog trips in Greenland. I love to run sledge dogs.

The greatest challenge was recreating La Condamine’s time in the jungle. I don’t like ‘creepy crawlies’ and had a rough time in the Ecuador rain forests!

9. How are ocean voyages of discovery different from explorations by land or in space?

Because the oceans are so vast – 70% of the planet surface and 99% of the living space on Earth, there is a sense of scale in sea voyages that is above land journeys. And because of that, those early sea voyages really do have an affinity to our space explorations now.

10. What oceanic horizons are there still to be explored?

Our oceans are 99% of the space on Earth and less than 10% has been explored by ground-truthing.

We have the only oceans in the solar system and we know more about the surface of Mars than we do about our own oceans!

A new species is discovered on almost every deep-sea dive.

We really don’t understand a lot about our oceans and how they work. The 6.5 billion of us have become a true force of nature and our activities are affecting the oceans in ways that we are only just beginning to understand.

We are in a race to learn about out oceans at the same time as they are changing. We need all the help we can get!

Paul Rose for WYCC Chicago 2009
Check out the Press reviews on the Testimonials page.