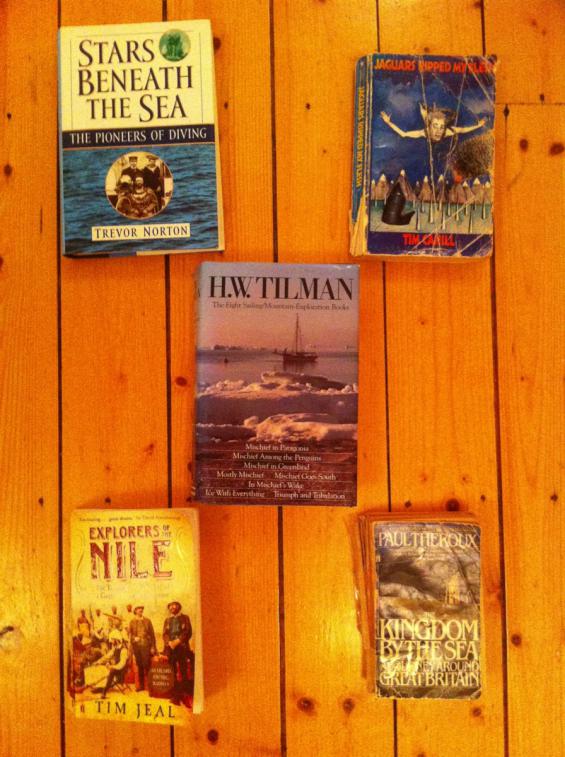 Ripping up books on expeditions!

Paul's report of his five most treasured books featured in The Holborn reveals more about Paul than the books!

Welcome to The Bookshelf, our column where we ask journalists, actors, designers and esteemed others to tell us their five most loved and treasured books and why they adore them so. This week we welcome famed explorer and documentary maker Paul Rose.

A man at the front line of exploration and one of the world’s most experienced divers and polar travellers, Paul Rose has been helping scientists unlock global mysteries for the past 30 years in the most remote and challenging regions of the planet.Paul is Vice-President of the Royal Geographical Society, an active explorer, television and radio broadcaster, a field science expert and published author. He has been working in Antarctica and the Arctic every year since 1990.

A popular and sought-after presenter, his television credits include the highly acclaimed BBC Oceans, Voyages of Discovery, Take One Museum and Meltdown. He reports for BBC News and makes regular appearances on BBC Breakfast, current affairs programmes and Sky News.He was the Base Commander of Rothera Research Station, Antarctica, for the British Antarctic Survey for 10 years and was awarded HM The Queen’s Polar Medal. For his work with NASA and the Mars Lander project on Mt Erebus, Antarctica, he was awarded the US Polar Medal.

The Kingdom by the Sea, A Journey around Great Britain – Paul Theroux

Climbing big mountains and skiing across icecaps is no place for extra weight. Every gram counts: I use the best lightweight equipment available, work out the food and fuel to be just enough, carry the barest minimum of spares and never take any spare clothes or anything that “might be handy”. This means no underwear changing and ripping up books.

Kingdom By The Sea by Paul Theroux is a lovely simple book about his journey around Britain and was ideal for my first expedition to Mt McKinley in Alaska. His reflections on Britain made a welcome diversion from the arctic temperatures and high altitude efforts of our climb. By dividing the book amongst the three of us tent partners it kept me true to my “weight is the enemy” credo and after three weeks on the expedition we had all had each section a few times. I taped it back together when I got home and, now 30 years later, I recently read it in the correct order for the first time.

Starts Beneath The Sea – Trevor Norton

Diving defines me. I remember being 11 years old and my life’s heroes were in their prime: Jacques Cousteau had co-invented scuba diving and was travelling the world with his dive team on Calypso. Hans Haas was making those fabulous black and white shark films and my ultimate hero, Mike Nelson, as played by Lloyd Bridges in Sea Hunt, was having proper diving adventures by rescuing pilots from downed jets and flooded mines and all of the beautiful women in the world wanted Mike to teach them to dive. I had just failed my 11+ and new nothing except that I wanted to be a diver.

I finally became a diver in 1969 and after 43 years of continuous diving, often in the world’s most challenging conditions, I am still as keen on being underwater as I ever was. I just love being underwater. Trevor Norton captures this feeling better than any other writer. His Stars Beneath The Sea brings to life the determination, dedication and sometimes sheer lunacy of the loveable pioneers of diving.

Jaguars Ripped My Flesh. Surely one of the best ever book titles? Tim Cahill was one of the founders of the beloved Outside magazine, a must-have monthly from the late 1970’s for all dedicated outdoor adventurers. I loved that magazine and Tim Cahill’s column was always one of the highlights. Jaguars Ripped My Flesh came out in 1987 when I was busy teaching the US Navy scuba diving programme, mountain guiding in Ecuador and Alaska, running a travel agency and outdoor equipment shop and was in danger of forgetting the fun of adventure.

Tim Cahill reconnected me to the reasons I love an adventurous life. He writes with a vitality and freshness that has always made me want to travel with him I’m sure that one day I will do just that. You know you are going to love him when you see some of his other book titles: A Wolverine Is Eating My Leg, Pecked To Death By Ducks. I’m already working up a title for our shared journey.

This book lives next to my bed and I have read it more times than any other. It was bought for me by my friends at Impact International before I headed to Antarctica to be the Base Commander at Rothera Research Station. They knew I would be travelling heavy in a remote region and could finally afford to keep my books in one piece! They also knew I had been inspired by HW Tilman’s “Put your boots on and go” approach to expeditions.

The Eight Sailing/Mountain-Exploration Books in this one big compilation is the essential book for everyone who needs to sense the true spirit and value of adventure and exploration. I have all of HW Timan’s books, but the beauty of having these eight stories handy at the bedside is that I can be instantly transported to a selection of explorations in Patagonia, Greenland, Antarctica, South America, Iceland and the Southern Ocean. From the comfort of my bed I really feel I share those triumphs and tribulations. He was an unbelievably tough, determined and talented man who wrote beautifully.

Explorers of The Nile – Tim Jeal

Finally the book I finished last night, a very welcome Christmas gift, Explorers Of The Nile by Tim Jeal. You might think that as Vice-President of the Royal Geographical Society that I would know everything about Victorian explorations in Africa. I walk past the Statue of Livingstone each time I come into the building and amongst our enviable comprehensive collections we naturally hold a wonderful range of objects and maps from early expeditions searching for the source of the White Nile.

I do know a lot about these expeditions, but Tim Jeal does a brilliant job of weaving in new research to provide really clear insights to Speke, Livingstone, Baker, Stanley and Burton. He brings a freshness to the stories and it feels like reading them for the first time. I raced through the book so when I have had a chance to recover from the diseases and spear wounds I’ll read it again.