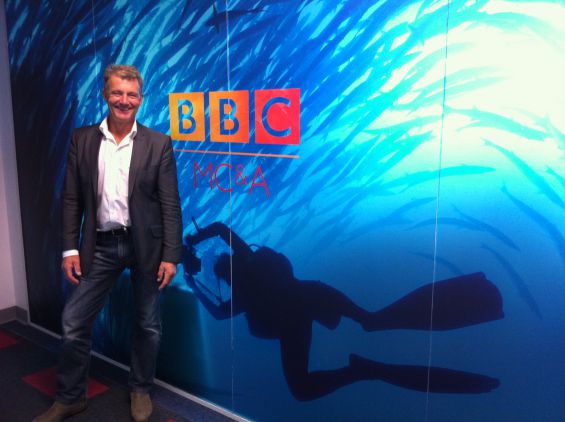 Earthwatch; The Value of Citizen Science!

From Antarctica to Britain's Secret Seas - it's all in a day's work for Earthwatch oceans ambassador Paul Rose.

How did your recent trip to Antarctica go and what specific projects were you involved with there?

We had a truly excellent season! It was my 13th Antarctic science support season and my second season on the Taylor Glacier in the Dry Valleys. We were there for just over two months. The Dry Valleys are a remarkable place - the coldest and driest desert on Earth and as with all Antarctic projects, we were at the end of the longest supply chain in the world, so it brings challenges. And with the right team, as this year again proves, we can achieve remarkable things.

I always say that field scientists are the hardiest people; impervious to pain, general discomfort, cold, heat, hard work and long hours in difficult conditions. The science plans that were developed in a laboratory and the committing hypothesis only works if we can deliver the exact standard of work that was originally plotted out. And of course, field work inevitably means working hard in worse conditions than were thought of, with an ever increasing workload from field-generated ideas and with diminishing resources and less time! My heroes are field scientists and I love to work with them.

Did you make any interesting discoveries and observations while you were there?

Last year we travelled extensively taking ice cores so that we could find the most suitable sampling location for this season's ancient air sampling project. Those results gave us an accurate position for this season and we were able to commission our new ice core drill, the ice core melter, and the gas chromatography lab in exactly the right spot. We also continued the shallow ice coring project across the Taylor Glacier.

In short, we had a very successful season; all of our equipment worked flawlessly and we collected the largest ancient air sample in the world which will be analysed this summer to see what part methane has played in past climate changes and therefore what part it plays today. It's a remarkable climate science project.

What's on the horizon - what new projects are coming up for you this year?

I'm here at home in the UK for the next couple of months which is great as I can support some tremendous work such as the Reefs at Risk launch at the Royal Society on 23 Feb - I'm presenting the launch keynote for this essential oceans awareness project. The Reefs at Risk event is part of a series of talks I'm delivering. I head back to Greenland in early April to run a polar training expedition. Then home for a few weeks and then back up to Greenland to lead a ski mountaineering expedition in northern Liverpool Land.

During the summer I have speaking and writing commitments, plus I'll be developing my next TV project, and then in November I'll be heading back to Antarctica with the same great Scripps science team. In the gaps I'll be sailing my boat on Lake Windermere, climbing, caving and walking as much as possible and even enjoying the great Lake District pubs.

Can you give us a quick preview of your new BBC2 series, Britain's Secret Seas?

My new BBC series is Britain's Secret Seas. I spent most of last year diving the beautiful waters of Britain and the four, one-hour episodes will be on BBC Two later this year.

Do you have any other television programmes being broadcast this year?

My last series, Oceans, is now being broadcast again overseas. It's been a real success and it's even on the long-haul flights (I still can't get a free upgrade though!). In fact I am just back from supporting the Our World Underwater Rolex Scholarship Society at the Copenhagen Dive Show and it was great to see that Oceans was very well received there too.

One the best things about Oceans is that when I do Oceans book signings I often get families telling me that the series is the reason that the whole family is now diving. That's a great reward for me.

How will you be involved with Earthwatch this year?

I am doing everything I can to raise awareness and bring support to Earthwatch activities. I really enjoy being the Earthwatch Oceans Ambassador and this year I will be joining one or two of the great marine projects. I will be chairing the Earthwatch lecture The Value of Citizen Science at the Royal Geographical Society on the 17th March. I will also be haunting Earthwatch HQ in Oxford for meetings and a good cup of tea!

What do you say to people who want to get out there and get involved in protecting the marine environment in 2011?

I would say ‘believe that you will make a difference'. Our oceans are the largest, most important and least understood ecosystem on Earth. We are overfishing and polluting at an astonishing and unsustainable rate and our marine scientists are in a race to understand the oceans before it's too late.

Every person that contributes to an Earthwatch project by participating in a project, funding, raising awareness and encouraging others, is helping to stop millions of sharks being killed for their fins, the continued loss of our corals, the destruction of the sea floor habitat by deep dredging and is helping us to stop our disastrous marine pollution. The Pacific Gyre Rubbish Patch is now about twice the size of Texas and if we can't clean it up then just maybe we can use it as the most sobering example of marine debris. By engaging with Earthwatch you make a difference.

And as I always say, Earthwatch makes earth sciences totally accessible. If anyone should ever doubt the value of field work or the importance of inspiring and encouraging the next generation by understanding the planet - then they should just spend a few minutes with an Earthwatcher!

Visit Paul's website to find out more about what he's up to.