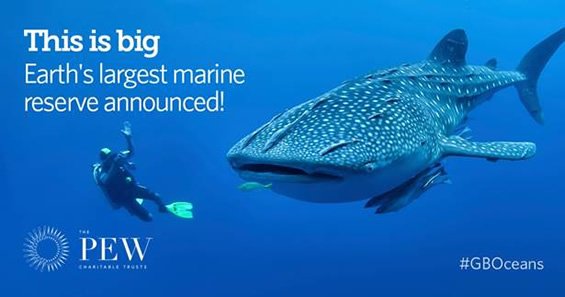 Leading conservation groups, scientists and residents of Pitcairn Island today congratulate the UK Government on its decision to create the world’s largest marine reserve around the Pitcairn Islands, a UK Overseas Territory in the South Pacific.

The Chancellor of the Exchequer, George Osborne, announced in the Budget that “The government intends to proceed with designation of a MPA around Pitcairn”. This decision begins the process of creating a fully protected marine reserve, extending from 12 miles offshore of Pitcairn Island to the full 200 nautical mile limit of the Territory’s waters, encompassing over 830,000 square kilometres of ocean, an area about 3.5 times the size of the UK.

Paul Rose, Expedition Leader, National Geographic Pristine Seas said:
“Ocean leadership like this from our Government is exactly right: It protects the pristine waters of our Overseas Territories, sets an example to the rest of the world, giving hope and encouragement to future generations. Thank you UK Government!”

Click the linki below to read the full Press Release.