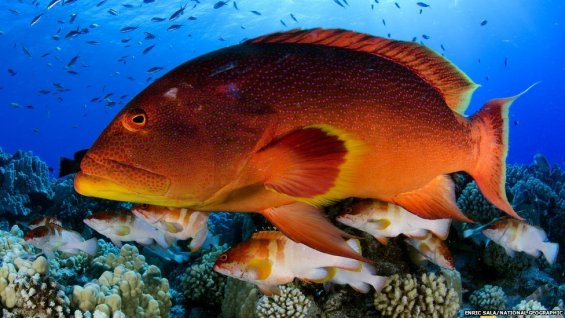 Did you have an outdoorsy childhood?

I grew up in Romford, Essex, which is a long way from true, wild, natural places. I was frustrated, I was claustrophobic living in a small council flat and not doing well at school. And I hated it.

Who were your heroes?

I remember watching television when I was 11 years old, seeing Jacques Cousteau travel the world on Calypso, and Hans Hass, who made those beautiful black and white shark documentaries. My all time favourite, though, was Sea Hunt with Mike Nelson, a fictional character played by Lloyd Bridges. He was having fabulous adventures and I wanted to do them – he was rescuing pilots from crashed airplanes, and miners from flooded mines, and all the beautiful women in the world wanted Mike Nelson to teach them to dive. And I remember thinking, ‘that’s for me’. I couldn’t do anything, I couldn’t do school, but I wanted to be a diver.

So when did you get your first taste of the outdoors?

When I was 14 I went with the school on an Outwards Bound course to Merthyr Tydfil, in south Wales, and we were walking and climbing and jumping in the rivers and I realised that I could do this; and the wilder, remoter and more challenging the better. That was my first connection to the outdoors.

So where did your career lead you?

For 10 years I was base commander of the British Antarctic Survey [ed: for which Paul was awarded the Queen’s Polar Medal]. I went in 1991 and came back in 2002. It developed from a field base of 50 odd people with teams of dogs to a base of 200 people with aircraft and everything else that goes with a very modern field station.

Is it true there’s a Paul Rose mountain in Antarctica?

A few years ago I had a terrific and very welcome surprise to open a letter from the Antarctic Place Names Committee to discover that a beautiful mountain, close to my old base, had been named after me. It’s a mountain I used to go to, off the beaten track. It’s a great honour.

Has all your fieldwork been in extreme places?

Fieldwork is either somewhere very wild, or very hot or very cold, or somewhere completely idyllic. You can pitch up and see us anchored in a tropical lagoon and think ‘wow, there’s a bunch of millionaires on holiday!’ And then the next time you see us we could be fighting huge seas with ice at high latitudes.

How do you manage being away from family and friends?

It’s not easy being away, and I manage it by recognising that it’s not easy. I’m aware that when I leave I’m going to miss my partner, Joelle. I’m always excited about going. In the past my neighbour has had to call me at the airport because I’ve left the front door open with the key in it – I was so excited about going I’d forgotten to lock up! I still get excited, but I balance that with efforts trying to understand that it’s going to be hard not to be able to call Joelle or my son, Scott, and his son, my grandson.

What do you miss when you’re away?

I miss being able to put the kettle on and have a cup of tea or popping down to the pub for a pint. I miss walking down the road holding Joelle’s hand. Life can be so varied at home – go to the theatre, pub or gym. There’s an amazing set of choices to vary and colour life. But if you’re away to cut ice cores or dive for science for six months then that’s all you do.

What luxury do you always take on expeditions?

Made-to-measure earplugs always go with me. If I am on a small camp in a polar region and it’s very windy, the earplugs can get the noise down so I can sleep. In a larger camp there are planes and helicopters coming and going 24 hours a day, and I need to get rest. Or if I’m at sea, my cabin might be next to the engine room or above the air compressor, so I always travel with earplugs. They are the greatest invention imaginable.

What’s your attitude to danger?

I don’t think you can work in places as remote and wild and challenging as I do, without the chance that something will go wrong. I’ve been run over by an iceberg the size of Hyde Park when I was diving in Antarctica – and it takes you a long time to swim your way from under that. I’ve been attacked by a polar bear. I’ve been around aircraft crashes in the Antarctic that claimed four good friends.

So what are the rewards?

When I set up the diving programme in Antarctica for the British Antarctic Survey, pretty much every dive was a world first, and nearly everything we saw was completely unseen, undescribed, and almost nothing known about it.

When did you cross paths with National Geographic?

I first met the National Geographic Pristine Seas [the project to explore and help save the last wild places in the ocean] team back in 2013. I had been approached to present their Pitcairn project at the Royal Society as a way to hook-in the value of the science and the compelling media that the team had gathered, and to turn the area into a large-scale marine protected area. That’s where I met the great man, Enric Sala, explorer-in-residence and executive director of Pristine Seas. We really loved each other’s approach, and knew we would work together, but we didn’t build any firm plans. Shortly afterwards I was running a big diving event in Ireland, and it was hellishly noisy with driving sideways rain when the phone rang. Enrik said something about Pristine Seas and the Russian Arctic and I said ‘yes’ without having any idea what I was agreeing to, because I couldn’t hear him!

Pristine Seas had been working in lots of temperate and tropical places, but they had never worked anywhere cold and they were faced with an expedition going up to the Russian Arctic, Franz Josef Land. That’s where my skills would play to their strengths. I have spent most of my life in the polar regions.

With Pristine Seas we discover something new on nearly every drop camera deployment. These are the deep cameras that we drop to the bottom of the ocean – really deep places like the Mariana Trench. And that’s hugely exciting because firstly it tells you how little we know about the ocean. It’s unbelievably exciting to be on-board, bring the cameras up and realise that we’ve discovered something new yet again.

Where would you most like to be right now?

In Antarctica. There is a lot of me there. It’s hard to get to, a unique continent with no permanent population – just scientists and animals, and a wonderful sense of life. I feel whole and complete there. I’ve been back almost every year since 1989.

Where’s your favourite place in the UK?

The Lake District, where I live. I can put on running shoes and within five minutes I can be up on a fell and getting a lovely sense of a wild place.

I’m addicted to the British coast – Chesil Beach is my favourite near Portland Bill. That’s where I had my first SCUBA diving lesson back in 1969.

What track are you listening to?

Three Men in a Boat by Jerome K Jerome, and Jaguars Ripped My Flesh by Tim Cahill.

Who would you invite on your dream expedition?

The great Norwegian explorer, Fridtjof Nansen; John Muir [the Scottish-American mountaineer, geologist, naturalist and conservationist]; and Donald Trump so that I could show him the beauty of this natural world.